A couple months ago, William showed me a toy that he wanted desperately. They were odd looking creatures, but cartoons have changed since I was a kid, and some of the creatures ARE odd looking. I let him chatter on about it, and gave him opportunities to earn money towards that toy.

Every time we went to Walmart, he wanted to looks at those toys again. He didn't have enough money saved, but who knows? Maybe they were on sale. (They weren't.)

And he told me that you could watch you-tube videos of these toys. I watched parts of a couple, and they seemed pretty innocuous. He's in second grade now, and he's pretty good at typing stuff into the computer. I wander in and out while he's on the computer, but I guess that I wasn't as focused as I could have been.

Anyways, he tends to get pretty focused on his interests, and Five Nights at Freddie's was no exception. He went on and on. It was when he came to me with one of his Lego creations that I began to have concerns. He'd built his own scooping room.

"What's a scooping room?" I asked. He started trying to explain that it was a room that where robots were built. I'm not sure why triggered my suspicions, but I did some checking into Five Nights at Freddy's, something that, admittedly, I should have done before letting him get that involved.

His mother and his grandparents tried to put the brakes on, but it was late for that. He was upset because he wasn't allowed to get the toy he so desperately wanted. He was no longer able to watch the little videos on you-tube. He was pretty upset.

He knows that there's no point in arguing but that knowledge did not stop him from wistfully talking about the fact that kids play this game on the bus on their phones (he does not have a cell phone) or some other handheld devices. A boy in his class felt sorry for him and offered to make a trade for one of the figures. (The trade involved money.)

He was told no.

He was playing with his aunt Cara's teddy bear. We noticed that he was fond of that particular bear. He came to me and commented that he'd like to make a top hat. Grandma, being a bit out of the loop showed him how to use poster board to make the barrel of the hat. We cut out a large circle to attach the barrel to. He used a super large sign marker to color the hat black. We taped it together, and he was excited. He colored two pink circles and asked me to cut them out. I did. He made a star and colored it yellow. He was getting more excited by the minute.

I gave him some strapping tape and he disappeared. When he returned, he had morphed gentle Marshmallow the Bear into Freddy Fazbear 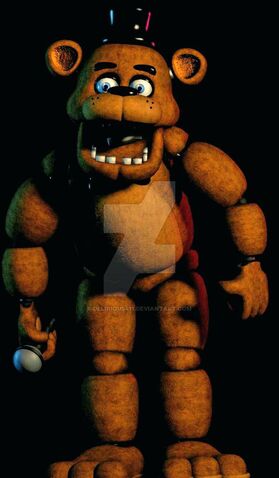 The boy gets points for creativity.

His mother was pretty upset. Grandma felt like she'd ruined the boy for life, but understands that we can't go backwards at this point. He knows about the game. He's seen the game at school. There's a lot of marketing for this game. I don't know why it is being directed at kids.

There are lego sets. There are toys. Videos. Children's Halloween costumes. These introductions are a lot less scary than the game, but in my mind, they are a segueway into something very unhealthy. Grabbing people and dragging them into a scooping room to have their guts scooped out so that these animatronics can wear their skins and fool people just does not sound like wholesome entertainment to the adults that are calling the shots in William's life.

Much to his chagrin.

William went with us to Dylan and Brittani's to meet his cousin. Dylan has a Nintendo. He showed William how to play Super Mario, and William was thrilled. He began to say, "I wish I had a Nintendo game..." and looking at Dylan with big brown eyes. Dylan, being a new dad, does not have the proper skills needed to deal with this kind of manipulation. He said, "You know, William, I don't play this game and I was thinking...." before Grandpa and Grandma cut him off.

William is 7. He won't be 8 until February. There has been plenty of evidence of the effects of video games on the brain of young children. So...we really don't want him to get hooked on video games ADHD is in his genetic make up, and we remain watchful for signs of that.

After some discussion, the decision was made. Today he got an inexpensive handheld Pac-Man game. Our hope was that it would satisfy his video hunger in an acceptable way. The rule is that he gets to play it for 1/2 hour. He earns that time by putting his toys away. Or eating without complaining. (Okay, it's a powerful, powerful bribe).

It was also presented as a way to work up to a Nintendo a year or so from now by proving his maturity: He does the work involved to get his game, and when his half hour is up, he puts the game away with no arguing or complaining.

So far, it seems to be effective.

Whatever happened to Whack-a-Mole?? Some straight-up innocuous violence... so hard parenting these days!! xx