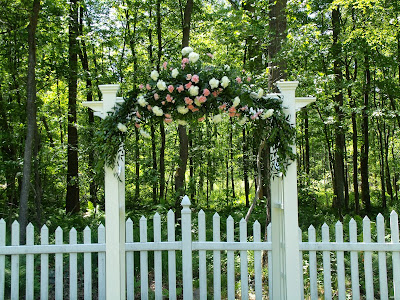 Brittani and Dylan picked this trellis out, and we bought it for them as their wedding gift. We all liked the idea that such an integral part to the wedding will become a part of their home. 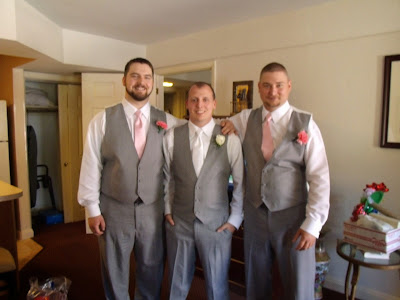 The best man is on the right. It is Brittani's brother Adam. Dylan and Adam were best friends. Dylan happened to meet his sister. He liked her a lot, but chose not to get involved because he was afraid it would wreck a friendship if it did not work out. As part of the wedding toast, Adam remembered when Dylan finally came to him and said, "Listen. Dude, would it be a problem if I dated your sister?" Adam's response was, "Dylan...we are going to pretend that we did not have this conversation." The fellow on the right is Jim, my sister Anna's boy. There are a ton of stories that I could tell you about this guy. 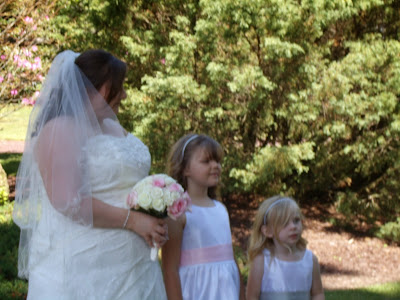 Brittani and her two flower girls (her nieces). One of them came down the aisle carrying a sign that said, "Here comes the Bride" On the way up the aisle, the sign was turned. It read, "...and they lived happily ever after..." So cute! 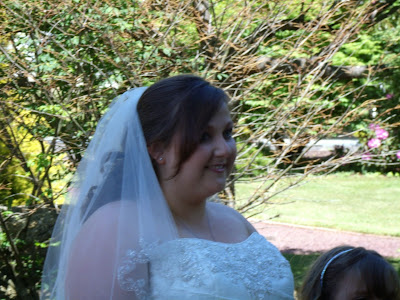 A better look at that beautiful smile and the eyes that my son promised to fall in love with again every single day of his life. 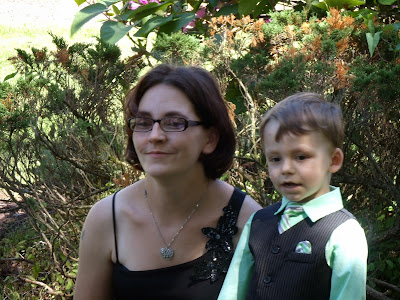 Brianna and William, who was the ring bearer and did a pretty good job of it. I promised him a party with cake if he helped Dylan and 'Aunt Bwitt-nee'. Which is probably why he got up front with his little pillow and began to say, "Where Aunt Bwitt-nee???" Several times. Insistantly. Because he was a little worried that she was going to screw up that whole cake thing for him. 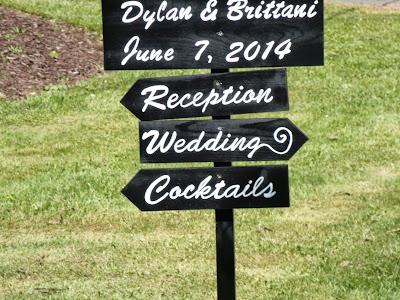 More of the cute signage.

Saying their vows. The groom promised to rub her feet at the end of a long day, and to always laugh at her jokes even if they were the only two people in a crowded room laughing. She promised to watch football with him, and to always cheer for his team, even though they both knew that the team would lose. The ceremony was unabashedly romantic, and sweetly funny all at the same time, which perfectly reflected the nature of the bride and groom. 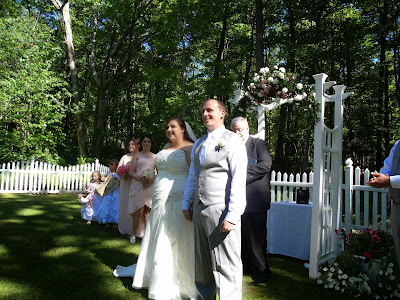 "
They are pronounced man and wife.

It is a terrible shot but a great party. With cake, just like I promised William.

It was such a happy weekend that I hated to see it end. The newlyweds are returning from their honeymoon to Bermuda right this very minute. They snorkeled shipwrecks and cliff dived. They came through the Bermuda Triangle on Friday the 13th under a full moon, and the groom thought that was about the funniest thing ever!
Posted by Debby at 10:52 AM

Thank you for sharing the beauty of this day. Best wishes to the newlyweds.

Great pictures, congrats, wishing you many years of happiness.

What a lovely wedding!!

Congratulations to the happy bride and groom!!

I love the signs!

Great photos and I am so pleased to hear all went well. I know your heart was full to overflowing. But one more thing -- where, might I ask, in the midst all of this beauty and joy, is the picture of the beautiful mother of the groom???? :-)

Congratulations and Best Wishes to the bride and groom. Loved your description of the ceremony and William's anxiety over his cake. Many, many happy years to them.