Happy New Year from our house to yours...

Tim does not like cats. He said so himself. The feeling is not mutual. Tim is reading 'Lone Survivor'. I was on the couch reading 'Hyperbole and a Half'. There is a blog.
Because my book caused me to laugh until the tears flowed, the cat chose to sit with Tim, because he wasn't wiggling around as much.

Discovery is an exciting thing. After dealing with a stubborn cough, the physician's assistant thought that perhaps I had allergies. She suggested Zyrtec. She was right. I am allergic. To Zyrtec. Hives and a swollen mouth and lips.

Needless to say, we're staying in tonight. All joking aside, we almost certainly would have anyway, but now we have an excuse.

William and Brianna are here so I will be bringing in the 2014 with three of the people that I love best in the world. I've made my resolution as well.

Ahem: I will stop taking zyrtec.

Party A: "They can take their curley Q mercury filled lightbulbs and stick them where the sun don't shine."

I about fell out of my chair.

Happy New Year, everyone!
Posted by Debby at 9:11 PM 3 comments:

William was feeling kind of under the weather yesterday, and took a little break from his normal cheerfulness. He played quietly with the cat while I wrapped, and but mostly he was quiet. When it came time to tuck him into his polar bear jammies, he pitched quite a fit. He did not want to go to bed.

I've started a new book, and so I said, "Would you like to watch TV on Grandma's bed while she reads her book?" He wailed, "Sleep in Gramma's beeeeeddddddddd."

So I retrieved my book as he headed for our room with "Little Cat" as he calls Paddington Paw-cat. I plugged in Mr. Bean. I love Mr. Bean, and I am the only person in my family who does. I had a hankering to see "Merry Christmas, Mr. Bean." I was not prepared for what happened next.

The first belly laugh happened when Mr. Bean fell from the sky onto the street, picked himself up and dashed off. By the time that we got to the part where Mr. Bean was acting out a little play with the nativity, William was laughing repeatedly. As Mr. Bean directed the Salvation Army street musicians, William rolled over from his pillow and announced "Mr. Bean FUNNY."

I've been waiting a long time for a person with a sense of humor like mine.


Funniest thing? When I was downloading this video, as soon as he heard the intro music, William began to shout, "Mister Bean, Mister Bean!"

Labels: Whose kid is this? And why is he calling me 'grandma'?

To Market, to Market.

Grandpa had an idea Saturday night. We went out in the cold for pizza, stopped to buy William mittens, and headed off to Bethlehem Marketplace.

William was quite happy with the pizza. He loved his new mittens. But when the Roman Centurian came out to demand which family we were from, well, William was not amused. We followed the centurian through twists and turns of the darkened church hallways, lit only by tiny battery operated tealights and fairy lights to signify the stars on a dark night. "Mind your step," the guard demanded, stamping his feet loudly so that we would not surprise any lions on the way. William was not pleased, and truth be told, I was starting to worry that perhaps this was not a child-friendly presentation.

We finally reached the market place, where spices hung heavy in the air, and we were offered smells of cardamom and frankincense, and the like. Homemade flat breads were offered to sample as a beggar crawled at our feet. Weavers wove and seasoned meat was offered. A merchant questioned my husband on the strange headgear that he wore. "What is Bimbadeen?" he asked, and we explained that it was a landowner in a faraway country called Australia who owned many cattle, and the merchant asked curiously, "How many days would it take to get there by donkey?" It made us laugh.

By then, William had relaxed too. He loves to sample things. He had some bread and a grape, and some dried fruits. He saw a well in the center of the market place and we explained this is where the water was drawn. He clambored up the side and looked down, and when he saw that previous guests had thrown money in, he wanted money too. He spent some happy time throwing coins. He loves to throw stuff too.

We were ushered to a nearby inn to refresh ourselves, and witnessed a Roman official and the innkeeper arguing about being taxed yet again. "You were robbed by dishonest Hebrews," the Roman official snarled. After an argument, the innkeeper paid up, and a little girl in the crowd was asked to count the coins to make sure there were five. William was very interested in the fake fire that glowed brightly, and a fish 'roasted'. He squatted there admiring the fish and eating a small piece of chocolate, chatting with the innkeepers wife, ignoring the debate altogether.

We went out of the inn, and found two shepherds complaining about the boredom of their work. 'If only, if ONLY something interesting would happen...' William was listening to their conversation intently, and just about jumped out of his hide when the angelic host began to sing "Hallelujah!!!" above our heads.

Still, he was game to follow the shepherds, and we were back outside on our way. We saw Mary and Joseph and baby Jesus with along with three sheep: Athos, Aramis, and Porthos.

The next morning, I dropped him home after church. Brianna called. "Did your church have its Christmas pageant?" and I said, "No. I don't think we have enough kids for one." Brianna said, "How strange. ever since he got home, William's been going on and on about finding baby Jesus in a manger with the sheep." I suppose it's safe to say that William enjoyed himself at the Bethlehem market place. 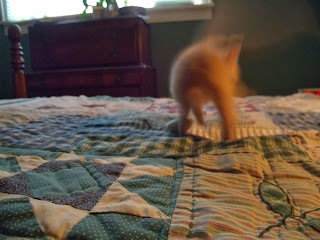 It is hard to photograph a kitten. This one is pretty active. He is a foundling. A friend's daughter discovered him and a brother abandoned by a street cat mother. She raised them before their eyes even opened. As is often the case with tenderhearted people, Stacey ended up with two more cats than she actually wanted. 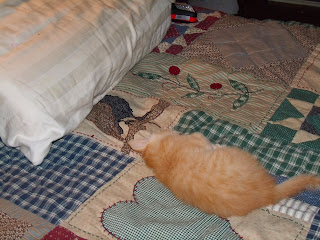 My own feral cat, Nash had decided that it was the life of a streetcat for him, (and to be fair, he may actually be someone else's cat.) We see him and his brother out and about, but they will not come to us. So I waited until winter hit, to make sure that Nash would not change his mind. 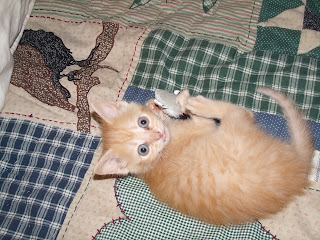 When he did not come home, I made the decision to adopt one of the kittens. Paddington Paw-cat. Paddy Paws for short. 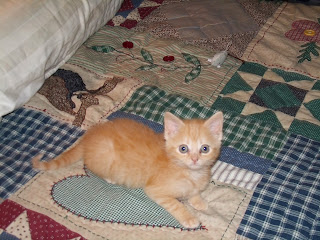 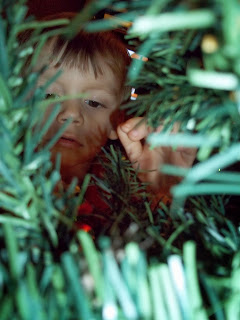 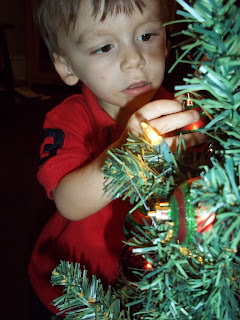 Labels: Good Stuff, Whose kid is this? And why is he calling me 'grandma'?

We had a sweet little Christmas pageant tonight, and I enjoyed helping out during the process. You get a chance to really mingle with the families. Kids were dressed to the nines, and the parents were videotaping and taking pictures.

After the pageant was done, the kids left the stage and raced across the gymnasium to find their parents, who swept them up and assured them that they were the best tree, best bird, best bunny, best star, etc. that EVER was.

One tall man swept his daughter up and held her close and whispered his praises into her ear as she hugged his neck tightly. Suddenly, I saw his face twist, as if he were in pain. The hand that wasn't holding his daughter went to his eyes, and I saw that he was crying.

I don't know his story. I know that the girl's mother was not sitting with him, so I drew the obvious conclusion from it. I also whispered a little prayer from my own heart that, no matter what, the little girl would always know that she had two parents who loved her dearly.

Yesterday, we went Christmas shopping. We bought a piece of art for one of the kids, and then wandered into one of Cara's favorite bookstores to look at what they have. Mixed in with books old and new, they have some antique things.

I saw a bank that evoked a memory so vivid that it took my breath away. The little globe read "Save a coin, save the world" around the base. My father had come home from work on my fifth birthday and handed an identical one to me with a few coins inside. I'd never had a bank before, and was tickled pink with the idea of having my own money.

I had sat on the floor of our house, taking coins out of the bank, depositing them again, and once again dumping them on the floor to begin again. I remembered hearing my father say, "You know, she really seems to like it." I didn't understand what he meant. I had looked at my little bank, and I wondered why he would say such a thing. Why on earth wouldn't I like it?

51 years later, my eyes misted, and I understood. That bank had been a free gift from our bank. My father must have stopped on the way home from work to pick it up. There had been no money for anything else.

My little metal bank had a dent in the middle of Europe, a small one. I picked this bank up, and saw a small place where the paint had peeled away.
I did like that bank, very much, and I don't know where it went, but I stood in the middle of that store, studying that little globe covered with names of countries that no longer exist, thinking of my parents now also both gone from this world. When Tim came over, I said, "You know, here's a Christmas idea for me..."