Today, there was a knock on my door and the little fellow from down the street came to help me assemble and set out 42 solar lights. I had an extra box, so we sneaked down the street to his house, meaning to set them around his mother's garden for a surprise.

A cat darted across the street meowing non-stop. He followed us and directed us as we set those lights.

When we headed back home, he followed us still, looking carefully both ways before crossing the street, being a wise cat.

Beck was quite worried about this cat, and whether he had a home, and did I suppose that he might be hungry, major questions like that.

I certainly thought that it was only polite to offer him a meal. He sat patiently as we opened a can of tuna fish and put it in a dish. He licked his little smackers appreciatively when we set the bowl down in front of him and began to eat. My little friend thought that perhaps Catfish would be a good name for him. "Perhaps," I said. 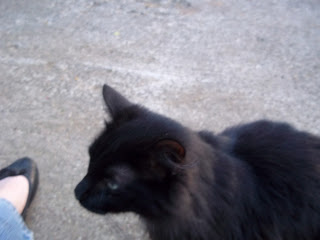 Beck thought that I should immediately bring him into the house and keep him forever. I explained to him that cats were funny people, and that sometimes they needed to decide where they belong. "Besides," I said, "wouldn't you feel terrible if you had a cat that went outside and never came back because a neighbor took him in her house and wouldn't let him out?"

Beck thought about this carefully, and thought I might be right.

We all went to a birthday party this afternoon, and on the ride back to the house, the big question was whether or not the cat would still be there.

Tim dropped us off, and went off to do some errands, not really giving a rat's butt whether Catfish was there or not. We set Beck's backpack and his bucket of party favors on the porch and took a quick look around the yard, but the cat was not there.

Beck was disappointed as we gathered up his stuff to walk the next block over to his house. He is not allowed to have a cat, his mother being very allergic, and he had been quite thrilled at the idea of co-owning a cat at my house.

I explained to him once again about cats, and that the cats who belonged to no one were always choosy about who they would let themselves belong to. As we came to the end of the driveway and turned left, towards his house, there was a meow.

"Did you hear that?" I whispered, and he whispered excitedly back, "Yes!"

And there was Catfish, coming out from under a shrub, glad to see us. He walked us back to Beck's house, once again looking carefully before he crossed the street.

People sitting on their porch laughed to see that cat walking with us like a dog. "Is he yours?" someone asked. He had been meowing at their back door a few days back and they felt terrible for him.

Beck and I explained that we were not yet sure but we thought he might be choosing us, and we walked on, the choosing cat following along.

I visited with Beck's parents in the evening as we talked about parties and cats, and then I headed home. 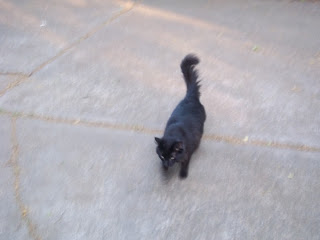 And the choosing cat chose to join me.
Posted by Debby at 8:36 PM

Ooooh, he's pretty... you should keep him, I think maybe! ;)
Hope to see you Tuesday after work!

Tim is not a 'pet' person, although he has patiently tolerated Ka-bluey the fish for several months.

What a pretty kitty!

You know, I've become quite the "cat person" since I've acquired three grandcats and one step-grandcat (Max, Lucky, Ornstein, and Mina) Mina and Lucky are both black, too.

I love this. Please let the choosing cat be chosen. That gorgeous house needs a cat. All houses need a cat. ;)

Note to Tim: you've got yourself a cat.
Note to Catfish: you're one smart kitty.
Note to Debby: well done.

Snoskred, I brokered an excellent deal since Tim has fallen in love with his new brick house. I explained that if I have to move from the house that I love, this is what is referred to as a 'sacrifice'. If I have to make a sacrifice, then one is required in return. I started out with a strong lobby for a dog, but reached an agreement at 'cat'. Someone thought that if I perhaps had started the debate at a horse, I've have surely ended up with a dog. :)