Okay. Little known fact. I cannot surprise Tim. I thought that I would surprise him at Christmas, but he read an e-mail from Bob, and he put two and two together, and surmised four, and figured out what he was getting for Christmas. I was very disappointed. But not surprised, not really. He always figures things out.

His birthday is coming. I've been thinking about it.

Pete, at work, is white haired, with a big white mustache, and he talks like Mr. Rogers. I hailed him. "Hey, Pete, before I forget, Tim is interested in the laminate flooring you've got left over. How much do you want for it? Let us know..." and I scooted off to get to my register.

Pete came ambling up at some point during the night. "I don't suppose you'd have any use for a buffalo, would you?" he says.

Turns out the man has a four foot tall buffalo mount, shot by some colonel in 1882. I can't even visualize the thing. It must be a shoulder mount.

"How much do you want for it?" I asked. Because Tim would never be expecting a buffalo for his birthday. He was bound to be surprised. Very surprised. Like this could be the surprise of the century.

Pete tells me that he's been lugging this thing around with him for 20 years. He said, mournfully, "We've been remodeling our house one room at a time, and my last hope was the living room. The living room is done now, and Linda tells me that it is not hanging there." At this point, he's trying to make sure that it does not end up in the dump, because his wife hates it that much.

Pete asked me how I was going to get it home. In addition to being four feet tall, it weighs about 150 lbs. "Dunno..." I said, but inside I was thinking '150 lbs?!!!' For the first time, I began to consider what four feet tall actually means. I began to have some doubts. 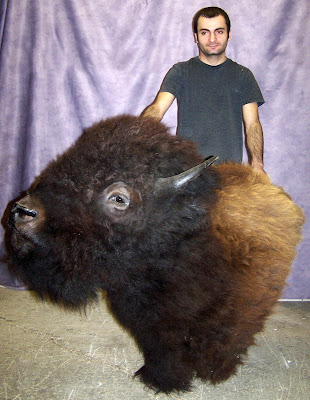 By the time that I got home and googled it (see above), I was beginning to wonder about this. Unless this guy's like maybe the size of your average 9 year old, I'm in trouble.

I also worried about the fact that we'd had a hard and fast rule that we'd discuss everything before bringing it into the house (this was his attempt to make sure no dogs or cats slipped by, and my attempt to make sure that nothing was painted orange). When I went to bed that night, I lay there worrying about my secret. I mean, if it turned out that he was horrified by the buffalo, well, I'd just opened the door to a black lacquer bedroom outfit trimmed in gold or some such monstrosity. He'd be able to say, "Hey, you brought a four foot tall buffalo into the house and you did not ask me MY opinion," and I would have to tolerate the black lacquer bedroom outfit because I had brought a buffalo into the house.

Finally, I said, "Hey, Tim?" and I told him. To heck with the surprise. I spilled the beans. Long pause from his side of the bed. "A buffalo?!!!" and "How big?!!!" The bed shook for some time as he laughed soundlessly at the thought of such a thing. I waited for him to put the kibosh to the whole thing. I waited for him to say no way. Then I could go back to Pete and say, "Listen...about that buffalo..."

It turned out to be a surprise after all. Tim said, "I know where that needs to go," and slipped out of bed to run to the library and measure the wall space above the mantle. He came back, and said, "It will fit." And he talked about buffalos and colonels and history.

You know how sometimes you get the idea that maybe you should have thought things through just a bit more carefully before opening your mouth? Why do you always get that idea after the fact?

What. Were. You. Thinking?

Did you really understand that you would then have to LIVE WITH the buffalo mount?

Well...no...what I was thinking is "This time he'll be surprised..." and I really didn't go any farther than that before my mouth kicked in.

Mikey? Sure a lot different than his deer pieces and bits and his rattlesnake hide and his fish. Decorating with dead stuff.

This is priceless, Debby. You're one of my few blogging friends that wouldn't be horrified by some of the things hanging on our walls.

Well, let's see, I have a bear, an elk, numerous deer, rattlesnake, beaver, turkey, caribou and more decorating my walls. Used to be in my living room but now that the basement is finished, everything is down there. BUT we do not have (and hopefully never will have)a buffalo.
Who's surprised?? LOL Too funny

Hehe, great story, Debby - I'm not sure if I could do it though; the thought of the buffalo eyes following me as I enter the room would be a tad unnerving, I reckon.

Oooh, Scotty...lots less creepy than those alien things that you're so fond of.

You know you asked for this, don't you?

Are you sure it will fit through the door?

Maybe it won't, and that would be a solution, wouldn't it?!!

Speaking from experience with an elk mount, even if you get it through the door, do you have enough backing in the wall above the fireplace to hang a 150 lb. mount so it won't come crashing down? Can't wait to hear how this story ends.

If it does manage to fit through the door, AND it stays in place over the mantle, I vote we name it "Bob the Buffalo!" LOL, have fun with that, Mom! ;D

I wanted to name it buffalo Bill, but somehow, Bob the Buffalo has a better ring to it. But I think that really, it might just be too big.

Please post pictures when you get Buffalo Bill or Bob or whatever his name is hung up!!!

OH. EM. GEE. A four foot high buffalo head... I am a little speechless at the mental image of this. (THe real image didn't alleviate the state of speechlessness either). Tell me it's nowhere near the guest bedroom!
:-)
BB

PS Your parcel arrived. That made me speechless too. You ARE naughty...

You should talk, oh naughty one.

OMG, am I ever glad my husband didn't see that buffalo first. He would love it. I have to admit, I find it pretty cool too.

Is it wrong that I have major Buffalo Head Envy? I dreamed that I drove down to your house and stole it, tried to strap it on the top of my car but there was too much wind resistance, so I put it in the back of my Subaru and covered it with a tarp. I woke up just as I was trying to smuggle it across the border by telling the border guard it was a pile of fabric scraps for a quilt.

No more pizza before bed.

But I still want that head!!!!