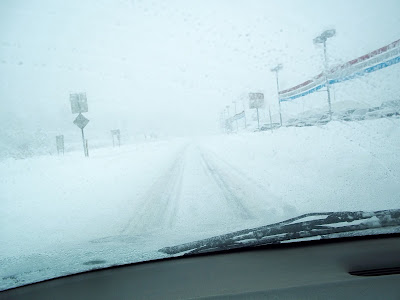 This is heavy snow. Driving in this stuff makes me nervous. 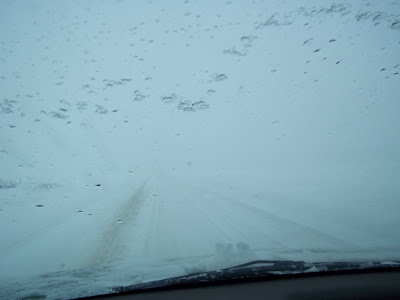 This, my friends, is a white out. You will see that you cannot see much beyond the hood of the car. Driving in this stuff makes me sick to my stomach.
*****
This morning, they did have school after all. I was driving in, and went to make my left turn. I heard the hiss of the anti-lock brakes, and the car continued on past the road I meant to turn down. "Well," I said, "Why don't I just take the scenic route this day?" So I turned off the turn signal and continued on, just like I had meant to do that. The route is a little longer, and surprisingly, it was quite icy compared to my usual route. I made it to class about five minutes late.


On the way to school today, I sweated bullets once again about that essay. To my mind, I wasn't sure if it proved my case, and so I worried. I finally gave myself a little mental 'shake', and said, "Listen. It is what it is." For whatever reason, this essay just about killed me, but I know for a fact that I gave it my very best effort. I figured that it was a good solid B, most likely, and once again, I told myself "A B is not a bad thing. Grow up!" I saw a woman from that class in the hall earlier in the day. She looked sick. Really, she looked like I felt, so I stopped. I said, "Well, are you ready for today," and she said, "No." And I said, "Me either." I told her about my late decision to totally rewrite it. She said, "You're kidding!" I said, "No. I'm not. So I'm pretty sure that this is going to be my worst essay, and I'm sick about doing the thing in front of the class, but I can tell you for sure: I'll be darn glad to have this class done and over." Turns out that she's writing two essays simultaneously. The one due today, and the one due maybe three weeks ago. I stared. "Your essay for your presentation is not done?" and she said, "I've never turned in a paper on time." I was shocked. "Really? Do you get in trouble?" and she said, "No." Huh. Who knew? Ah, well. It's done.


In any case, I gave my presentation about the marginalization of men, and wound up with "Devaluing half a population kept women captive for hundreds of years. Now freed, we must keep our eyes open that the same devaluation doesn't make captives of the other half." And I headed to my seat. A young girl said, "You really should think about going in to the field of psychology. You'd be good at it." That was sweet. The teacher said, "She really does a marvelous job, and that surprised me too. At the end of the class, I said to Mrs. B., "Thank you. I really enjoyed this class." She said, "I really enjoyed having you in my class. The older students really stimulate discussion." I'll miss her. And the class.

I have four more projects due, and then I'm done. I can count them on one hand. That's exciting.
Posted by Debby at 5:35 PM

Forget driving in it. I wouldn't be comfortable even trying to WALK in it!

I don't know how you Yankees (said with affection) do it!

You really need to learn to give yourself more credit than you are used to doing. You're smart. You're articulate. You're logical. You're dependable. Why wouldn't you be able to write a well-thought out paper on any topic presented to you? You rock!

I'm with Kelly....I don't see how you drive in that stuff.

You are more courageous than I. And I'm not surprised that your instructor is impressed by you.

No snow here yet. However, ours usually arrives after the first of the year, is wet, and usually accompanied by ice. However, I have zero intention of driving in it should we get any next semester. Mary does not do ice. The two times I did, I wound up in the ditch (which cost us an oil pan) or spinning out.

Congrats on finishing another presentation and glad to hear you can count the remaining projects on one hand! You sounds like an amazing student and you shouldn't be so hard on yourself! We are awaiting a snowstorm forecasted for here tomorrow. Perhaps blizzard conditions, no driving around for me!!

Congrats on getting that essay done! I can't believe all your snow. Wow!! I don't miss driving in it!

Love the snow pictures and glad it was you, and not me, driving in that stuff.

Great job. Another semester under your belt.