Tim got up very early to drive to Mike's house and go hunting. Tim loves hunting. So does Mike. Is it genetic? Evidence in this house seems to point to 'yes'. Mike could not go hunting because he'd taken his doe and buck during archery season. That's what happens when you get way too good at your hobby. So he took his father out to a 'hot spot' he'd scoped out with a trail cam before the season started.

I got home from school to see Tim's truck back. Mike's truck was also in the driveway.

I got out of my car and noted that Mike's deer cart was mudded up.

I walked past Tim's truck and peeked into the bed. His tow strap was there, and it was blooded up.

I walked into the house and Tim said, in a careless way, "Grab the camera. I want to you to get a picture of my nice doe."

I looked at him. "You can't fool me," I said. "You got a buck and it's a good one. That's the exact same line you pulled on me when you got that one," and I nodded at the buck on the wall."

And they both said "Doe," one more time. And I answered "a deer, a female deer, re, a drop of golden suuuuuuun..."

"That's a good sign," I thought to myself as I got the camera. 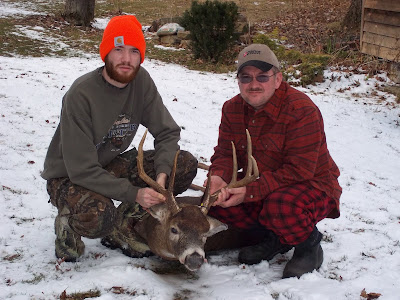 Yep. They were lying to me. Tim got a very nice buck.
Mike is a good deer guide. 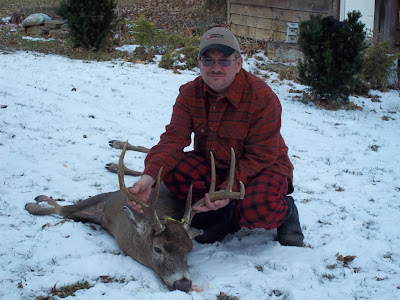 The deer had a broken antler on one side, so it is not something we'll be paying to get mounted and hang on the wall. I laughed and said, "Gees, Mike, you think of everything, don't you?"
Posted by Debby at 1:10 PM

Nice! My dogs love deer antlers cut up as chews. Check 'em out online, they're expensive! Your blog is pretty much the first one I check every day. The staff at our TSC is nice enough, but you really seem to go the extra mile. They are lucky to have you.

Meat for the freezer! Nice way to end November.

Tell Tim congratulations. Nice buck!! And look at that snow!

*sigh* We have deer bones all over our yard right now. Our outside dogs enjoy visiting the local "gut pile" and bringing home souveniers.

Congratulations to Tim on getting his deer!

Cool! Congrats to Tim!! (Can they not get bonus antlerless deer tags there? Thomas bought a lifetime license several years ago, so he can get a LOT of extra does, and we now have more than our freezers can handle, so we're passing them out to friends and family. lol)

I forgot to add: nice photo of dad and son!

Nice going! The guys would have loved seeing the big bucks we saw in the mountains last week. One jumped the fence right in front of us.