The thing about kids is that they grow up. You raise them to do their own thinking, to be independent, and then, shock of shocks, they do just that. Tattoos are nothing new in this house. Our oldest two girls did it years ago. They didn't ask our opinion on the topic, just matter-of-factly got it done, and never saw fit to mention it. By the time we saw the tattoos, months had elapsed, and there was no sense to debate the issue at that point. They've both got some sort of Chinese symbols. I've no idea what they mean.
*************************
Dylan got a huge tattoo that covers his entire left side. It's something he designed himself. The tat is a torn flesh design with micro chips and gears peeking through the hanging flesh. It's gruesome and enormous and when I first saw it, I was rendered speechless. He's fiercely protective of this design, and will not allow me to photograph it, because he does not want it copied. He thinks that it is a cool design that expresses his love of his job, an electrical mechanical maintenance specialist with an interest in robotics and programmable logic controls. I guess. All I know is the thing is HUGE. That's what happens when a young man finds himself with disposable income.
********************
Cara is in college now, a history major. I should have been prepared for it, but still it came as a shock. She began by telling me this story about Constantine's Divine Sign. It was an interesting little story, but I did not see what it had to do with me. She wanted to send me an e-mail, but kept requesting that I not get mad. In my obliviousness, the idea that she had gotten a tattoo never even occurred to me. Even when I saw the pictures. Squinting, I said, "Wait...is that a tattoo?" and when she laughed, the dawn began to break. "Wait..." I said again. "Did you get a tattoo?" She laughed even harder.

This is the Divine Sign of Constantine. Cara's a bit of a tightwad, especially now that she's in college, so I was flabbergasted. She explained to me that she had been thinking of getting one for a while. When she heard the story of Constantine, and saw the symbol, she decided this was her tattoo. A local tattoo place just happened to be having a sale. She could get her tattoo for $50. Not being a girl to make a decision in haste, she left the tattoo place to mull it over, came back to her dorm room, and stopped for her mail. There was a birthday card from her father with $50 in it for her 19th birthday. "Don't you see?" she chortled. "It was a divine sign!"
Dear heavens. 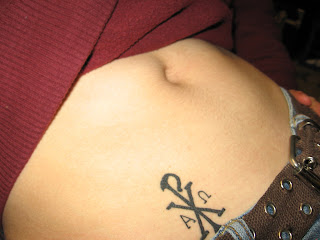 Some girls would do a cute little butterfly, or a fairy, or a rose. Cara's a history major. She got 'The Divine Sign on Constantine' on her hip.
********************
She hasn't told her father. As a matter of fact, two years later after his tattoo, Dylan hasn't told him either. Their father is unhappy that Brianna has 'defaced herself'. The top of his head would probably blow off if he ever caught a glimpse of Dylan's huge tattoo. If he knew that all three of them had tattoos, it would become an issue of faulty parenting, which would put the blame fully on me, which is makes it convenient for him.
*sigh*
Curious, I asked "Why is it that you don't hesitate to tell Tim and I stuff like this, but your father never hears these little stories?" Cara said, "Because we know that you'll love us anyway." "Hmmmmmm," I mused, "until this moment, I'd always seen unconditional love as a good thing."

Post Script: Due to the fact that Cara checks in on this blog, and doesn't hesitate to criticize, here is the story for those who don't take the time to click on the link.
Constantine was in the midst of the battle of Milvian Bridge, a battle that seemed quite hopeless for a time, when he saw the Chi Rho, emblazoned upon the Sun. Along with this sign, words were whispered to him, "In hoc signo vinces" or roughly translated, "under this sign, conquer." Constantine did indeed conquer under that sign, and won the Roman Civil War. In 313 he went on to issue the Edict of Milan, ending the Great Christian Persecution (begun by the dominate Diocletian c.284-305 AD) Chi Rho literally means the sign of Christ, and it is occasionally referred to as "the divine sign" (side note. Pagan Worship was finally banned by Theodosius (reign 378-395 AD)
Posted by Debby at 8:01 PM

Labels: Whose kids are these? And why are they calling me mom.

Andrea's got one of those design tattoos that spans her spine -- I can't even imagine how that must have hurt. As far as I know, that's the only one she has (but do you tell your mother?). Tom, as luck would have it, is terrified of needles. Thus, no ink and no piercings. It's remarkable how easy it is for him to get a job. (Now if he'd just get a career!)

Wonder what they'll look like when they are our age?

yo, madre. I just sent you better pics, will you put them up instead of the current pics? Plus, you should write a little about the meaning of the symbol.

At least the artwork is original, Deb. They could be going through life with cliches branded on their bodies. Cara's is interesting looking.

We've made a real issue of the permanence of tattooes in our house and how they so often change to something less than flattering as they get older. I still wouldn't be surprised if they all turn up with them after they leave home.

Yo, nina, I provided a click on link for the story. You come to my blog to criticize me? Your father is right. You've been poorly brought up.

Mary - I heard a woman complaining that the tiny tasteful rose that she had tattooed above her breast had metamorphosed into a long stemmed rose as she aged.

That's a way cool tattoo. I got a tattoo when I was 21 and have never regreted it. When I was in nursing school, after a hard semester of Chemistry, myself and 4 other nursing students sold our Chemistry books back to the school book store, then after a few drinks) we went and all got the same tattoos. We are all still friends.

Cara's tattoo symbolizes something with a great meaning, I think that's a sign of a great upbringing.

Perhaps after conquering cancer you should go out and get one yourself :)

I have never been tattooed, only because I can't draw for carp and have an idea in my head for what I want that I know I will never be able to emulate for someone else to do.

Then again, I would hate to change my mind.

How do we know the chinese symbols say what we are told?

I love Cara's and the story, though. Good on her.

Dylan's tattoo and his reason for getting it. reminded me of this site:

Debbie, we learned as you are that when your kids are old enough you can't tell them what to do. As long as they don't come to harm, love them anyway! I liked your little label... - Dave

I wonder what it will say after a pregnancy or two???
Sorry. That was mean.
Great tat Cara - you go girl.

I'm 53. I'd guess that to my generation tattoos are still a sign of the subculture, one of low class. This younger generation does not seem to view them as such, and finds them quite acceptable. Funny how things change.

Quid, your Andrea may think her body art is "cool," but I hope she is/was aware that the tattoo frequently seen spanning the lower back of young women (just above the beltline) is commonly known as a "tramp stamp" here in the U.S. The Germans and the Aussies call them "arse antlers" and the Brits call them "slag tags." Hey, don't kill the messenger.

Eventually all of the oldsters of my generation (i.e. those who do the hiring and firing) will fade away, and tattooed and pierced Gen-Y'ers will take over. Scary thought, that. Until then, if anyone comes to me for a job and I see ink creeping up and out the neck out of their collar, or peeking out of their shirtsleeves, it's an automatic, "Okkkkaaaaayyyyy...thanks for coming in anyway. We'll call you."

Funny. And close to home. I recall telling MY parents I have a tattoo. Heh. Mine's not so interesting as Caras. (Similar location though). I like.

Intrigued by reactions here - definitely a generational thing. Personally I'm not into masses of ink. A little goes a long way.

Oooh Portia - No tattoo for me. It's not that I'm afraid of needles. It's more that I'm just darned tired of them. Maybe I'll just get one of those lick on tattoos to celebrate the end of chemo. Or go for ice cream. Maybe they'll give me a sparkly pencil. I dunno.

Al - welcome back! I've been worried about you.

David M - Tattooed scientists! The concept made me laugh. We just won't mention this to Dylan, although I'm pretty sure he's finished with the tattoo thing.

I'm also a tattoo fan. I waited until I was 37 to get one and would have more if my husband (ex-marine & Vietnam vet with NO tattoos) didn't despise them so much. Older daughter has two that I know of, younger daughter has three (I went with her to get the second). My son has no desire for one.

Gees, Soulbrush, no need to apologize. I'm just kind of surprised that all three of them have tattoos. I'm not against them. I just never thought much about them. I can't call myself a fan, but I don't recoil in horror. Although once I saw this woman who had a tiger that took up her entire back. The whole thing. It was fresh and it was oozing and her shirt stuck to her back...aaaaaaaaaack!

Ever see the movie "Tattoo" with Bruce Dern? Bizarre!

Having a few tattoos myself, I obviously don't have a problem with them on males or females except with the proviso that they're tasteful, maybe. Cara's is nice, an unusual design and I sure would love to see Dylan's - I like the ripped flesh and biomechanical look, so much so that I'm toying with the idea of getting a few of my old ones (eagles and roses stuff) covered over in that style. Remember the first Alien movie when the captain is in the ventilation shaft and he turns to see the alien's head coming at him? That's what I've got on my left forearm.

Red - you could number those freckles and market yourself as a educational toy for the kidlets. Much better than a dot to dot book.

My daughter has a ( I guess it's now called a Tramp Stamp! ) butterfly on her lower back. I think it's gorgeous. I think I'll let her know it's a tramp stamp and see her reaction.

Somehow I don't think she'll do more than laugh.

My son has a number of tatts.

I haven't gone that route but I do have triple-pierced ears.

I have so many allergies I just know that I would have had some kind of horrific allergic reaction. I have enough problems with my ear piercings from time to time.

I loved the movie "Tattoo". Also read a good book of the same name. Very strange.

No tattoos for me or any of my family members . . . that I know of. Bob B. and I think alike on this one.