Over at Mary's blog, she and Scotty came up with a new tag. The challenge was to tell something about yourself that people might not know. My first thought was that I'm pretty much an open book. How much more candid can I possibly be? How much more candid should I be? And then it came to me. There is something that I am hiding about myself. There is a deep, dark secret that you all do not know. I'm feeling especially bold today, so I'm going to tell you.
**************
A while back, Jeanie did a post on 'hoons'. I'd never heard the word before, and did some questioning. A hoon is a motorhead. Tim is a motorhead. His first car was a Camaro, and he had the fastest car in Sheffield for a time. We still have a Camaro carefully stored out back. I drove it once. It doesn't drive like a regular car. When I started to pull out from a stop sign, suddenly gravel was flying and the rear end was swinging, and I just about had heart failure. Tim laughed and laughed. I discovered that there is something oddly soul satisfying about driving a powerful car. And when I got home, heart pounding, Tim still chuckling, I got out of that car and said, "Mama sticks to the station wagon from here on out," and I did.
***************
Anyways, Tim goes to the car races sometimes. I hate them. They are noisy and dirty, and there are some icky people there. It's a waste of money to buy me a ticket. I sit there bored out of my mind. Pretty much watch the people. You'll find some pretty strange folk there, men and women alike. (Before people get all outraged, I'm not saying that only freaks go to races. My husband goes, and he's not a freak. Leastways not that you can tell, right off, anyhow). But there are a lot of freaks who like the races, let me tell you. Men with way too much testosterone. Vulgar and rude, and ignorant, picking fights, drinking. Come to think of it, there are a lot of women who apparently have too much testosterone as well. I mean, I'm a strong woman who carries herself like a woman who can take care of herself, but some of these women carry themselves like they would love a chance to kick an ass, anyone's ass. I'm all for assertive and strong. Can't abide outright in-your-face aggressive behavior. But, I digress. I don't go to the races, choosing to stay home with a good book, or to go play Scrabble with my friend Mary.
******************
Mary is the one married to Danny. We've been friends since the first day of seventh grade when we were both lost and looking for room 208 in the strange new world of high school. Anyways, Danny is also a 'hoon'. Worse than Tim though. He used to compete. He's retired from all of that. Now their son, Luke, carries on. Last year, Mary and Danny were talking about stock car football. This is a popular event held at the local county fair. A team consists of three cars, two on the track, one sitting out, ready to step in if a car on the field is disabled. Luke has a team. I went because Tim wanted to see it. and, plus, Mary was going to be there. I discovered, much to my shock, that I like stock car football. I actually yelled so hard that I hurt my throat.
******************
Last night was the big night, and I was excited to go all day long. I worked hard at the house, kept checking the time, casting anxious looks at the sky. It did down pour just as we were leaving the house, but we went anyway, despite the thunder, despite the lightning. And it was so totally worth it! 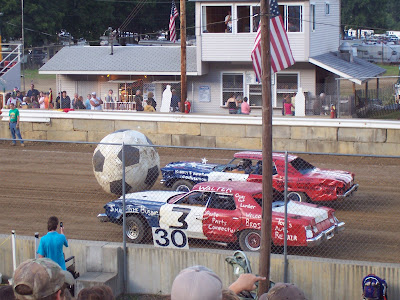 Luke and Walter line up, waiting for the start. 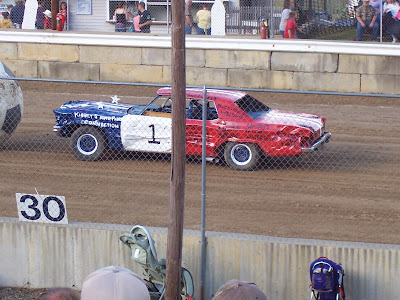 Here's Luke's car, heading for the giant ball. The goal is to get the ball past the opposing team and over their goal line. 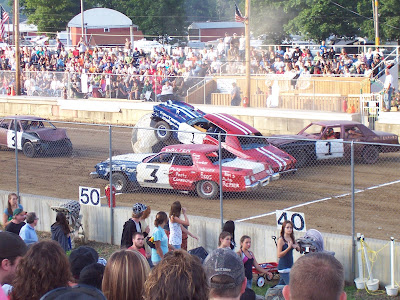 The 'Black and Tans' tried to cut off the Red, White, and Blue, but no one quite knew what to do when Luke's car actually went right up over the ball, and then STALLED. There was one heartstopping moment when the number three car crashed into the ball from the other side. We all held our collective breath that Luke's car would flip up and over backwards. Last year, Walter (who is the one driving number three red white and blue) actually got hit so hard that he flipped several times. We all leaped to our feet with our hands over our mouths, but Walter's arm come out the side window of the upside down car to wave wildly at the crowd. The car was flipped rightside up and the game continued. Luke and Walter won the event last year, with Danny as the back up driver in the spare car. 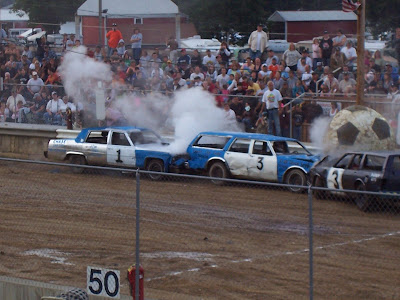 It wasn't just the 'Luke and Walter and Pete Show', of course. Other teams competed, two at a time, a total of ten teams. 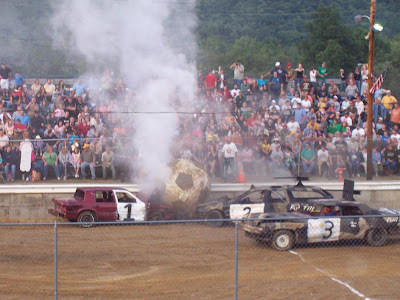 There were some hard fought battles. I discovered that I'd make a pretty poor cheerleader. My cheers seemed to consist of 'GO! GO! GO!' and 'NO! NO! NO!' and 'OH! OH! OH!' There was one prolonged scream of 'Waaaaaaaaatch out!' It is hard to take pictures and scream with both hands over your mouth. 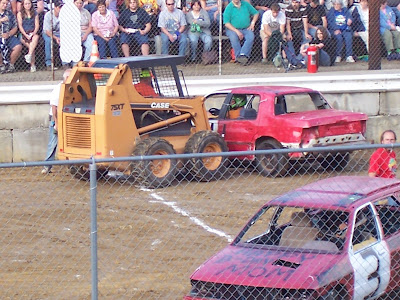 Cars were disabled, and pushed off or lifted off. Note the one hood on number three. 'Happy Birthday, Mom' it read. Next year, Mom probably hopes that the boy just gets her a card. And interesting note to all of this is that twice the skies opened and it poured, and the thunder and lightning provided quite a back drop to the drama on the track. And though many in the crowd bolted at the first rain, the die-hard hoons sat right there. Neither rain, nor snow nor dead of night...pah! the post office has nothing on the hoons, to be sure. 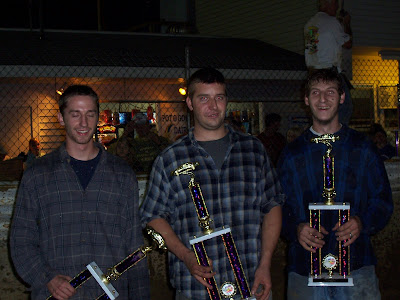 In the end, the 'Red, White, and Blue' took it for the second year running. From left to right, Walter, Luke, and Pete. Good job.

There you have it. One thing about Debby that you did not know. If you're reading this, consider yourself tagged. Inquiring minds want to know. What is something no one knows about YOU?

Man. My throat is KILLING me this morning.

I've been a bit of a hoon, a petrolhead, in my time too, and for many years (15 in fact) I drove a V8 XY Falcon similar to this one, except mine was white. Mine had the 302 Cleveland block instead of the Windsor but it did have a Borg Warner diff and the C4 automatic transmission. It also had a dual exhaust system with tuned headers and a 650 double-pumper Holley carburetor. During my Defence Force days, that car took me from one side of Australia to the other (back in the days when petrol/gas was affordable, that is) and I used to love the open road and the rumble of that thing. It's quite a feeling to be sitting on 140km/h on the highway and, needing to pass a roadtrain (semi), simply put the foot down and feel the carburetor throat open to let more fuel in, feel the auto trans kick back a gear, and hear the growl of the exhaust; before ya knew it, the speedo was passing 170km/h (and eerrrr, sometimes more).

Sigh. A part of me misses those V8 days.

Wow, totally things I did not know!!! Not only about you, but about stock car football.. I had NO idea such a thing existed.
Looks like a blast!!! Hmmm, wonder if that goes on around here...
*shaking head* things I never knew....

PS
Tell Tim I'll come move his stove and fridge if he'll come fix my truck!!
Today Wade drove it (to the mechanics) well it locked up on the right front, went off the road and he nearly flipped it. Scared the crap out of him. Glad as all hell it wasn't me driving w/Mercy in the truck.
I left it at the dealership/mechanic with a lovely note... they better fix it this time!!!
I need TIM!!!!

Scotty: Tim dropped everything to come over and scope out the Falcon. PW: I'm not much of a speed demon myself. I used to be, I suppose, but now I'm a nervous driver. Jeanie: It's a terrible addiction that keeps one's behind firmly planted on metal bleachers while a thunder and lightning storm raged. It's a sickness, I tell ya. Mikey: We only see it here once a year, at the county fair. If you see it near you, oh, golly it's fun. Each match is eight minutes long. The two highest scoring teams go to the 'Superbowl' and compete once again to determine the winner.